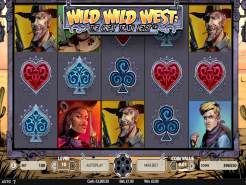 Play Now
GameArt is known for producing slot games with tons of character and detail. They don’t just create online slots – they create some of the most attractive ones around. We review Apocalypse Quest and Wild Wild Quest here, giving you a choice of two quests to go on in search of slot game prizes. Are you ready?

Five reels give you 243 ways to pick up prizes in this steampunk-style game set after the Apocalypse. Expect lots of characters, all packed with detail, on a set of reels situated in front of a dystopian city backdrop. Four jackpots are displayed above those reels, and there are plenty of characters to find as you spin them. The game includes Apocalypse Respins, unlocked with a minimum of six Hero symbols (that’s the bonus icon). The heroes change into Nemesis icons and everything else disappears. You’ve then got to find more Hero icons during your respins, with the original set of three respins reset to that quantity whenever you find another Hero. This round is where the jackpots can be won, too. The scattered female character can unlock free games whenever she appears on the three odd reels of the game.

Arrive in the main street in this Wild Western town and get ready for some colorful and entertaining cowboy action. Five reels are topped by the title in the middle and two jackpots on other side. There are 243 winning ways here, just as in the previous game. A woman holding a pistol is the wild symbol, while a bearded cowboy is the scatter. He only appears on reels one, three, and five, while the wild woman can appear anywhere. She doesn’t replace the scatter or the bandit (more about that in a second), but everything else can be substituted for a chance of more prizes. Three scattered cowboys unlock nine free games. Only the highest-paying symbols appear in these games, improving the odds of finding better prizes. If the bandit appears at least six times, the Bandit Respins begin. These are like the respins in the previous Quest game. This time, the Bandits are held and everything else disappears. Each respin could see more Bandits appear or the chance of some prisoners turning up. You can secure prizes from the respins, including one of the jackpots above the reels.

Which quest is best?

It’s down to personal taste, of course. Do you prefer an apocalyptic landscape or one that takes you to the Wild West? Your answer determines which game you are most likely to enjoy.

Wild Wild Quest. There are some differences between the games, but we liked the presentation of this one more. That’s our opinion though – you can try both at the official GameArt website to see which one you prefer.
Play Now